Our hearts go out to the suffering and underprivileged children and older widows in India. This overpopulated nation has about 35 million orphaned children who are neglected by their neighborhood communities. Eleven million children live on the streets and are simply ignored by thousands of passersby. 500,000 female children between ages five and 10 are forced into the sex trade every year because of their poverty, innocence, physical inability, and illiteracy. Saving them all is impossible – but together we can change some of their destinies. Please help us with your resources.

Story of Karuna, An Orphan in India.

Parents : Sreenu and Subbu Laxmi (Both died of AIDS)

Ambition: Become a doctor to serve her community

Karuna has a tragic life story that is all too common in India. Karuna and her grandmother are from a village in the state of Andhra Pradesh. Along with her grandmother, Karuna came to Redeem India to tell her story and seek financial help to fulfill her ambitions to serve her community by earning education. Her family was predominantly tribal, living as pig farmers. People who take care of pigs in India area 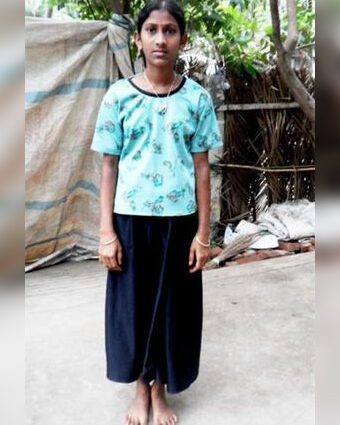 considered unclean, dirty, and usually live in isolated hamlets. Her family worshiped nature and idols rooted in Hinduism, although they are not recognized by orthodox Hinduism.

Her parents were initially resistant to the gospel, but when an SAI-affiliated evangelist kept pursuing them, they accepted Jesus Christ in 2000 and allowed Karuna to attend the church. Karuna has strengthened her faith in Jesus and boldly stands for Jesus in front of her friends in the village.

Due to HIV/AIDS, Karuna lost her father in 2004 and mother in 2011. Her grandmother, who lives in a thatched-mud house and runs a small chicken shop, took up the task of rasing Karuna, despite not having enough food for them both. Karuna trusts that Jesus will carry her through though she has nobody to care for her and old grandmother has very little to offer.

Investing in Karuna’s life is investing in the nation and in the kingdom of God because she has an ambition to become a doctor and serve the suffering communities, embodying Christ.

SAI has been providing for the basic needs of the poorer children and older widows with an aim to give them eternal hope in Jesus Christ. SAI also helps conducts medical camps in the remote villages of India and provide medicine supplies to the malnourished, sick children, and older men and women. Currently we are giving monthly scholarships to 15 school-going children and monthly financial support to 14 widows.